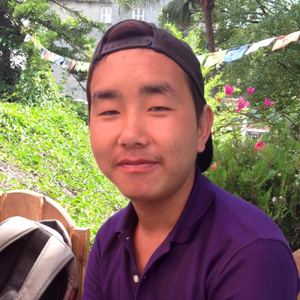 Nyima Samdup is born in Deng Village of Kutang region. He has completed his School Leaving Certificate from Manjughoksha Academy. As being an eldest child, he has a greater responsibility on his shoulder for his family. After high school degree completion from Campion Academy, he worked as a school teacher in Ro (Samagaun) village for 3 years. He used to spare his time in trekking guide since 2013. He took part in guide training in Nepal Academy of Tourism and Hospitality Management (NATHM) He scored the highest marks combining both theoretical and practical aspects of trekking guide. He guided trekkers from Germany, Switzerland, Canada and the USA to Tsum Valley, Ghorepani and his native homeland Manaslu. He has a great sense of humor and loving character person. He likes to share funny jokes and incidents with trekkers to motivate the entire team to release mental and physical pain during the trek. He can quickly take a reasonable decision to easily handle an awful situation. Besides trekking, he is also involved in social works. Especially aftermath of 2015 Earthquake, he played an important role as a social mobilizer to re-build school in his home village. He is bilingual. While his home region speaks a unique language ku-key meaning stolen language, he likes to learn as many different languages as possible. He speaks Tibetan, Nepali, Hindi, English and his own local language and ku-key as a mother tongue.