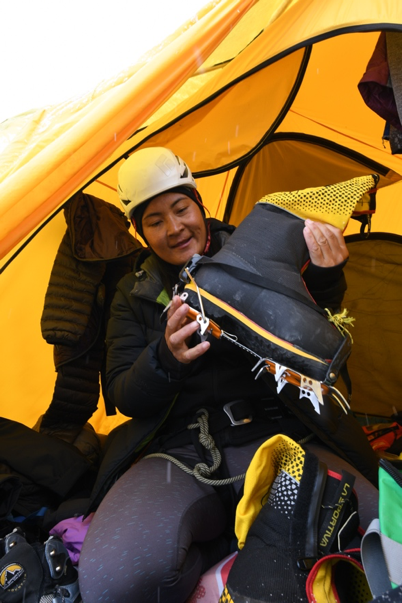 Phunjo was born in Chhokangpaaro village of Tsum in an extended family of twelve. She spent most of her childhood in the rugged mountains with her grandfather Me Norbu herding yaks, dris (female yaks) and dzo (hybrid between yak and cow). Later she studied in Kathmandu mainly learning English and Nepali language. Her mother tongue is Tsum ke (Sino-Tibetan). She speaks fluent English. She has visited Switzerland, Germany, Slovenia, France, USA, Austria, Australia, Thailand, Singapore, India and Tibet Autonomous Region of China. She likes to guide a bigger group mainly interested in climbing peaks in and around Tsum and Manaslu region. She will also be happy to guide an expedition to Mt. Everest, Mt. Manaslu, Amadablam, Lobuche and open to work in expeditions to many other unexplored peaks in the Himalaya and around the world.
She is also a first Nepali woman long-line sling rescuer, trained in the Swiss Alps and in the Nepalese Himalayas. Phunjo Lama is a first woman and a mother to summit Mt. Everest from Tsum Valley and Manaslu region. She climbed Mt. Everest in 2018. She also climbed Mt. Cho Oyu solo without oxygen, Mt. Manaslu, Amdablam, Lobuche and Mt. Denali in her ongoing mountaineering career that has started in 2015 to take a deeper and wider look in the mountaineering tourism. As a result, she is also becoming a source of inspiration to many talented yet unemployed young girls to turn the adventure tourism into a basis for survival and just a new way of life. For that she sees there is dire lack of training in safety especially among girls. She believes that “Mountains are much safer place to survive than in the chaotic cities such as Kathmandu and New York.” During off-trekking season, no wonder she is mostly seen in the climbing walls of Kathmandu.